Far UVC Light is the right solution to reduce microorganisms

For decades, scientists have known that broad-spectrum germicidal ultraviolet rays with a wavelength range of 200 to 400 nanometers (nm) can effectively kill bacteria and viruses by breaking the molecular bonds that hold their DNA together. This conventional ultraviolet light is commonly used to purify surgical equipment. 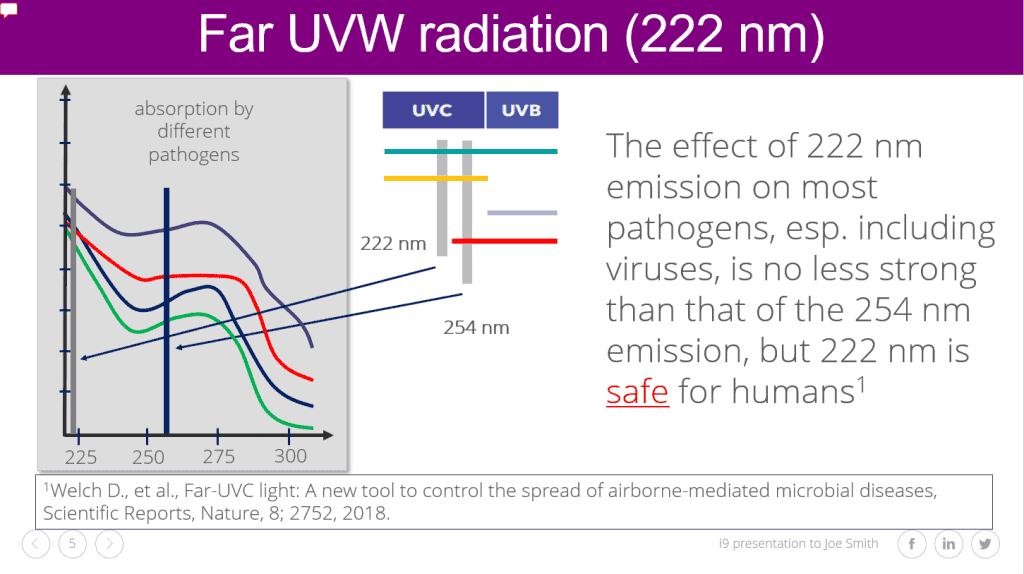 Unfortunately, conventional germicidal ultraviolet rays are also harmful to human health and may cause skin cancer and cataracts, thereby preventing its use in public places. We added that mercury lamps were previously used to fight viruses and bacteria, but due to the risk of decompressing the flask and the environment contaminated by mercury, they are not suitable for medical or biological purposes.

The term “exciter” is used for an ultraviolet lamp that emits ultraviolet light through the attenuation of excimer and excimer molecules. Excimers are the source of narrow-band ultraviolet radiation.

Nowadays, the barrier discharge vibration exciter has been the most widely used. This type of lamp was developed in 1982 by the National Institute of Optics in cooperation with Roscosmos (equivalent to NASA) in Russia and SI Vavilov in Leningrad, Russia. In these lamps, the radiation is triggered by a barrier discharge generated by a high-frequency generator. Provide the required wavelength by emitting inert gas molecules or halogenated inert gas compounds.

The research on the effects of KrCl and KrBr excimer lamp radiation on microorganisms and chemical particles began in the Department of Cell and Genetics of Tomsk State University in early 2000. In terms of its technical parameters, excitons are a very effective system that can inactivate viruses, bacteria, and pathogens with ultraviolet light. The research was supervised by Dr. Eduard Sosnin from the Department of Physics, Tomsk State University, Russia.

For the past nine years, Dr. Brenner and his team have been developing the use of FUV radiation exciters. These lights can neutralize bacteria, bacterial spores, molds, yeasts, and viruses, including SARS-CoV-2. They can be safely deployed in the occupied space.

Another study titled by Hiroshima University researchers published in the American Journal of Infection Control in September 2020 is the disinfection effect of 222 nm ultraviolet rays on SARS-CoV-2 surface pollution and found that 222 nm UVC light excitation can eliminate 99.7% The severe surface contamination of Acute Respiratory Syndrome Coronavirus 2 (SARS-CoV-2), the virus that causes COVID-19.