Is The New Covid-19 Mutant Strain “IHU” Worth Worrying About?

Is The New Covid-19 Mutant Strain “IHU” Worth Worrying About?

With the latest reports of 12 confirmed cases in France, is the new COVID-19, “IHU” worth worrying about?

This novel new strain of coronavirus was first identified in southern France, and researchers speculate that it may be a new strain of Cameroonian origin that contains both N501Y and E484K mutations in two key genes in the stinger protein.

A recently published, unreviewed research paper by French researchers has been the focus of international media attention. Researchers at the Institute for Medical and Pedagogical Research on Mediterranean Infectious Diseases (IHU Méditerranée Infection) in Marseille, France, detected a COVID-19 mutant strain B.1.640.2, also known as the “IHU” variant.

The news was first announced on social media by the IHU Institute in Marseille on Dec. 9. In late December, the team published a preprinted article in medRxiv detailing the IHU variant, which carries 46 mutations and 37 gene deletions, 23 of which are located in the spike-in protein.

The article shows that this COVID-19 virus variant was first identified in southern France, and the researchers speculate that it may be a new strain of Cameroonian origin that contains both N501Y and E484K mutations in key genes in the stinger protein. 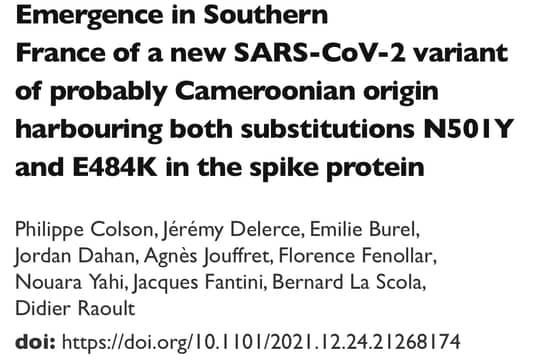 The N501Y mutation may increase the infectivity of the virus, while the E484K mutation may produce immune evasion, according to one virologist.

However, from the number of mutations, the IHU mutant strain carries more mutations, which has also caused concern among researchers. The aforementioned virologist told the first financial reporter: “It is still difficult to judge the characteristics, impact and danger of this mutant strain with respect to the known information, and it is complicated to decide whether a virus can be epidemic or not, but the monitoring of this mutant strain should continue to be strengthened.”

Since November 22, the B.1.640 variant has been classified by the World Health Organization as a “variant under surveillance” (VUM), meaning that despite the presence of the mutation, the virus currently lacks virological, epidemiological or clinical evidence to support a public health impact.

Cases of infection with this mutant strain are still rare. In the Marseille IHU study, researchers said that 12 patients carrying this mutant strain of B.1.640.2 have been identified. They also said that these 12 cases alone are not sufficient to speculate on the virological, epidemiological or clinical characteristics of the IHU variant strain.

And globally, epidemiological testing platforms do not differentiate between the two sublines. According to the latest data from the GISAID epidemiologic surveillance platform, about one hundred cases of infection with the new mutant strain have been identified worldwide, most of them in France.

Although some scientists have expressed concern that the number of newly crowned cases in the PACA region of southern France has increased in recent days, most researchers believe that the current level of transmission of the variant is so low that it cannot compete for the time being with the Delta variant, which is driving the fifth wave of the epidemic in France, or the highly infectious Omicron variant.

French public health agencies are stepping up epidemiological surveillance and in vitro studies of the new variant to assess the characteristics of the variant and its public health impact.

Dr. Tom Peacock, a virologist at Imperial College London, believes that there is no need to worry too much about the mutant strain just yet. He said on social media, “The gene sequence on B.1.640.2 was uploaded to the GISAID website by researchers in Paris on November 4, while the Omicron gene sequence was uploaded three weeks later, on November 22, by researchers in Hong Kong, China.”

Peacock further said that this indicates that the mutant strain has been spreading for a relatively long time and clearly has not prevailed in terms of its infectiousness. In addition, B.1.640.1 has spread more widely in Europe than the B.1.640.2 variant and deserves more attention, even though the B.1.640.1 gene sequence does not contain the E484K mutation, meaning that the variant does not easily evade immunization.