On November 26, the World Health Organization (WHO) issued a statement classifying the new strain B.1.1.529 as a “strain of concern” and naming it Omicron, a new strain of COVID-19 found in several African countries.

In its statement, the WHO noted that the Omicron variant contains numerous mutations, some of which are of concern. Experts who sequenced the COVID-19 variant B.1.1.529 found that it has more mutations than all previous COVID-19 mutant strains, with 32 mutations identified. The Delta mutant strain reported in October of last year had only 15 mutations.

How long has this mutant strain been around, and what do the 32 mutations mean? Will infection with Omicron be more severe? Does it reduce the effectiveness of the vaccine? Four questions about omicron >>

1 Nine countries and territories have reported cases of omicron infection

1 Nine countries and territories have reported cases of omicron infection

Since South Africa reported the discovery of the mutant strain to the World Health Organization on November 24, at least nine countries and regions, including Botswana, Belgium, Israel, the United Kingdom, Germany, Italy, Hong Kong, China, and Australia, have reported the discovery of the novel mutant strain as of November 28. In addition, the Netherlands and the Czech Republic are also suspected to have traces of this mutant strain, and further sequencing of the virus genes is being done.

On November 25, the first confirmed case of a new variant of the New Coronavirus was found in Hong Kong, with two cases at the Regal Airport Hotel carrying the newly identified variant of the New Coronavirus B.1.1.529 strain in South Africa. The Center for Health Protection (CHP) of the Hong Kong Department of Health has arranged for quarantine of relevant hotel personnel, and there are no relevant confirmed cases for the time being.

The first known confirmed case of B.1.1.529 infection was a specimen collected on November 9, 2021. It was first reported to WHO by the South African government on November 24 at the earliest. In recent weeks, there has been a dramatic increase in infections in South Africa, and the majority of cases have detected the B.1.1.529 variant.

It is reported that 27,829 new confirmed cases of new coronary pneumonia have been reported in South Africa in the last week (from 20 to 27).

2) 32 variant mutations, what does this mean?

Dr. Yuge Wang, an American immunologist and postdoctoral fellow at Harvard Medical School said on his personal microblog that B.1.1.529 has 32 mutations in the stinger protein, which overlap with the Delta and Alpha mutant strains in several places, so the mutant strain may have characteristics of enhanced replication ability.

Its RBD has 15 mutations, which is the mutant strain with the most RBD mutations and may affect antibody recognition and vaccination. It has the H655Y + N679K + P681H mutation near the Furin cleavage site, which may enhance viral replication and infectivity. b.1.1.529 has nsp6-del105-107, which may affect intrinsic immunity and T-cell immunity. In addition to this, its N protein has R203K/G204R, which enhances virulence.

3) Infection with the new mutant strain will be more serious?

According to RIA Novosti 27, the president of the South African Medical Association, Angelique Coetzee, introduced the symptoms of infection with the new strain of the new coronavirus “Omicron” on the 26th of November local time, and said that the variant currently causes only “mild disease “.

“It is a mild illness with symptoms including muscle aches, fatigue, and a slight cough. So far, we have found that infected people have not lost their sense of taste or smell and have no significant symptoms.” Kuche also revealed that some patients are being treated at home.

4) Does the new strain reduce the effectiveness of the vaccine?

Regarding the new variant of the virus recently detected in South Africa, Zhong Nanshan, an academician of the Chinese Academy of Engineering, said at the summit forum “Focus on Indoor Environment – Building a Community of Human Destiny for Universal Epidemic Prevention” held on November 27 that not much is known about this variant of the virus, but this virus carries numerous mutations, which also poses more challenges for epidemic prevention work. The challenge is that the virus carries many mutations and poses additional challenges for epidemic prevention.

Aris Katzourakis, who studies virus evolution at the University of Oxford in the United Kingdom, said, “A pressing question is whether B.1.1.529 will reduce the effectiveness of the vaccine because it has so many mutations.”

In an interview with Nature, Penny Moore, a virologist at the University of the Witwatersrand in Johannesburg, South Africa, said his lab is evaluating the ability of B.1.1.529 to immunize against escape. There are anecdotal reports of reinfection in individuals who have been vaccinated, though Moore said it’s too early to say that at this stage. 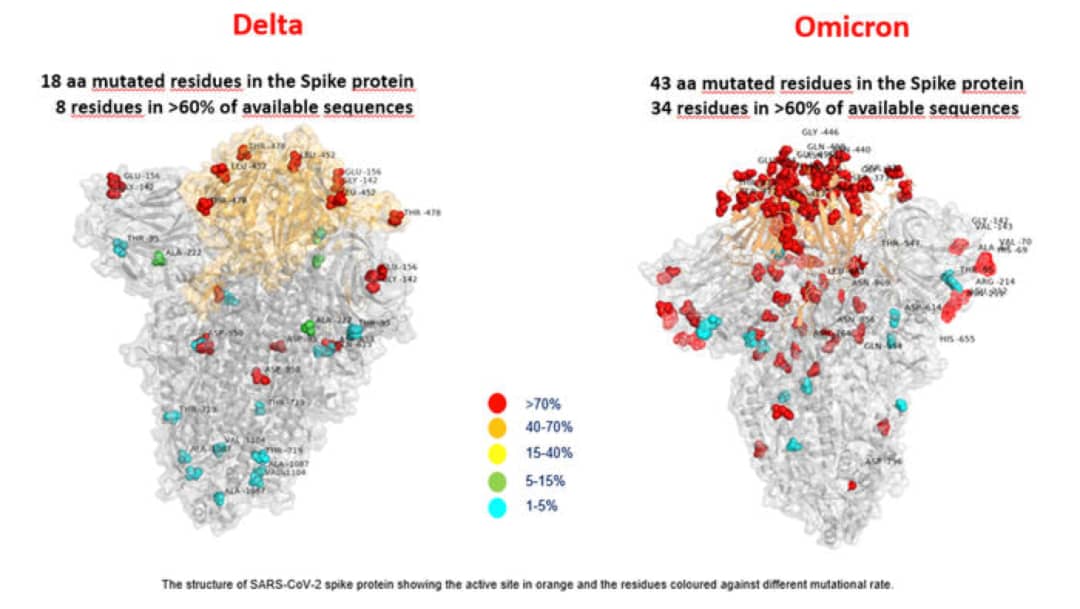 For the sudden mutated strain, Zhong Nanshan, Wu Zunyou and Zhang Wenhong have also published their latest research and judgment.

Zhong Nanshan: In the face of mutant strains, strengthen inbound prevention and control!

On November 28, when attending the first national meeting of the Respiratory Diseases Branch of the China Rare Diseases Alliance, Academician Zhong Nanshan said that the Omicron variant strain spreads fast, but since the variant is very new, although molecular genetic testing has revealed that it has more changes in the receptor binding site, how harmful it is, how fast it will spread, whether it will make the disease more serious and whether a vaccine (R&D) is needed for it, will have to be judged according to the situation.

He believes that the harmfulness of the mutated strain of Omicron will take some time to be judged and will need to be kept in mind, but that no relatively major action will be taken yet. The main response at the moment is to prevent and control people coming from relevant places in South Africa.

Zhang Wenhong: There will not be a big impact on China at the moment

On November 28, Zhang Wenhong, director of the Infection Department of Huashan Hospital of Fudan University in Shanghai, also posted on Weibo, talking about his views on the Omicron mutant strain. He emphasized that the Omicron variant is a product of virus evolution, and the WHO is currently including it as a strain of close concern out of caution, but the overall strain needs to be observed for another two weeks because the total number of strain sequences has not been released yet. He believes that it will not have a major impact on China at this time and that China’s current rapid response and dynamic clearance strategy is able to cope with all types of new crown variants.

Zunyou Wu: The prevalent strain this winter and next spring is mainly delta

As for the epidemic strains in China in a short period of time, Wu Zunyou, chief epidemiologist of the Chinese Center for Disease Control and Prevention, said at the “Caijing Annual Meeting 2022: Forecast and Strategy” on November 28 that the epidemic strains this winter and next spring will mainly be delta, and whether the South African variant of Omicron can develop into the dominant strain needs further close observation.

According to mathematical models, Omicron is more contagious than Delta, but public health measures such as wearing masks and maintaining social distance are effective for all mutated strains, regardless of how they mutate, said Zunyou Wu.

Zhang Boli: We need to take measures in six areas

Zhang Boli, a member of the Chinese Academy of Engineering, pointed out in an interview with the Health Times on November 27 that there is an international trend of accelerated mutation of viruses, and we need to take measures in six areas.

Strengthen monitoring and tracking, establish sequence database, improve the frequency and quantity of sequencing, and report important mutations found in a timely manner; establish a national virus strain database, infection serum and antibody database, study the driving factors of virus mutation, establish research methods for virus phenotype, transmission ability, pathogenicity and vaccine escape, and clarify the virus pathogenic mechanism; improve the convenience and accessibility of testing, establish identification and rapid detection of mutations We should establish a technical platform for the identification and rapid detection of mutated strains, and make a good reserve of rapid detection technologies for mutated strains; strengthen the development and promotion of rapid detection technologies to improve the convenience and accessibility of detection; carry out research on specific antiviral drugs; encourage the development of multiple types of vaccines; and adhere to and improve the concurrent treatment of Chinese and Western medicine.