What Is The Meaning Of UVA, UVB, UVC, UVD Respectively?

What Is The Meaning Of UVA, UVB, UVC, UVD Respectively?

Wavelength 320 ~ 420 nm, also known as long-wave black spot effect ultraviolet. It has strong penetrating power and can penetrate the most transparent glass and plastic. More than 98% of the long-wave ultraviolet rays contained in sunlight can penetrate the ozone layer and clouds to reach the earth’s surface, and UVA can directly reach the dermis layer of the skin, destroying elastic fibers and collagen fibers and tanning our skin.

Wavelength 275-320 nm, also known as medium-wave erythema effect ultraviolet. Medium penetrating power, its shorter wavelengths will be absorbed by transparent glass, most of the medium-wave UVB contained in sunlight is absorbed by the ozone layer, and only less than 2% can reach the earth’s surface, which will be especially strong in summer and late afternoon. 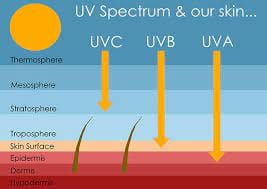 Wavelength 200 to 275 nm, also known as short-wave sterilization UV. It has the weakest penetrating ability and cannot penetrate the most transparent glass and plastic. The short-wave UV contained in sunlight is almost completely absorbed by the ozone layer.

UVA is a terrible sunlight killer, it can penetrate the surface layer of the skin and penetrate deep into the subdermal tissue with its long wavelength and strong penetrating ability, which can destroy collagen, elastic fiber tissue, and other microstructures inside the skin, producing wrinkles and fine lines and making the skin sagging and aging. This is called photoaging in medical science.

UVA is 15 times higher than UVB in the energy distribution of ultraviolet rays in the sun and is the main cause of skin tanning. It reduces the amount of water-binding hyaluronic acid in the skin, which dries out the skin, accelerates melanin formation and darkens the skin, and is also an important cause of skin cancer.