What Is The Effect Of UV Disinfection On The Inactivation And Resistance Of 3 E. Coli Species？

Home/UVCA News/What Is The Effect Of UV Disinfection On The Inactivation And Resistance Of 3 E. Coli Species？

What Is The Effect Of UV Disinfection On The Inactivation And Resistance Of 3 E. Coli Species？

A 40 mL sample was taken in a 90 mm diameter sterilized Petri dish and placed in a UV parallel beam meter to receive UV irradiation. The samples were stirred magnetically to ensure the uniformity of E. coli distribution. The UV intensity of 100 μW/cm² was measured by a UV intensity meter (UV-B type, Beijing Normal University Optoelectronics Instrument Factory). A series of different UV irradiation doses were obtained by controlling the irradiation time.

Three UV disinfection experiments were performed for each strain. E. coli concentrations were determined by nutrient agar plate counting of samples before and after UV disinfection. The logarithmic inactivation rate (R) at each UV irradiation dose was :

The drug sensitivity assay was performed by the K-B (Kirby-Bauer) paper agar diffusion method. The original samples containing E. coli strain SER6 were sterilized by UV light at 80 mJ/cm², and a number of single colonies were randomly selected and made into a suspension with 0. 5 Mackay turbidity in sterile 0. 9% NaCl solution. The samples were incubated at 35℃ for 18~24 h. The diameter of the inhibition ring was measured by vernier calipers, and the sensitivity of the tested strains to antibiotics was determined according to the CLSI enterobacterial drug sensitivity test.

The original samples containing E. coli drug-resistant strain SER6 and the samples after UV disinfection at 200 mJ/cm² were taken separately, and the aqueous samples were filtered with suspension solution using 0. 22 μm microporous membrane, eluted with 3% beef paste, centrifuged, and placed in 4% para formaldehyde overnight at 4 °C. The supernatant was poured out and washed twice with pure water. The ethanol-isoamyl acetate solution (v/v, 1:1) was used with 30%, 50%, 70%, 80%, 90%, 95%, 100% ethanol. The isoamyl acetate solution was washed sequentially, in which 90%, 95%, 100% ethanol, and pure isoamyl acetate were washed twice for 15 min each, and the rest of the concentrations were washed once for 10 min. natural drying for 1 week, gold spraying for 120 s, and SEM (Japan, JSM-6700F) photography for observation.

1)Effect of UV light on inactivation of experimental strains 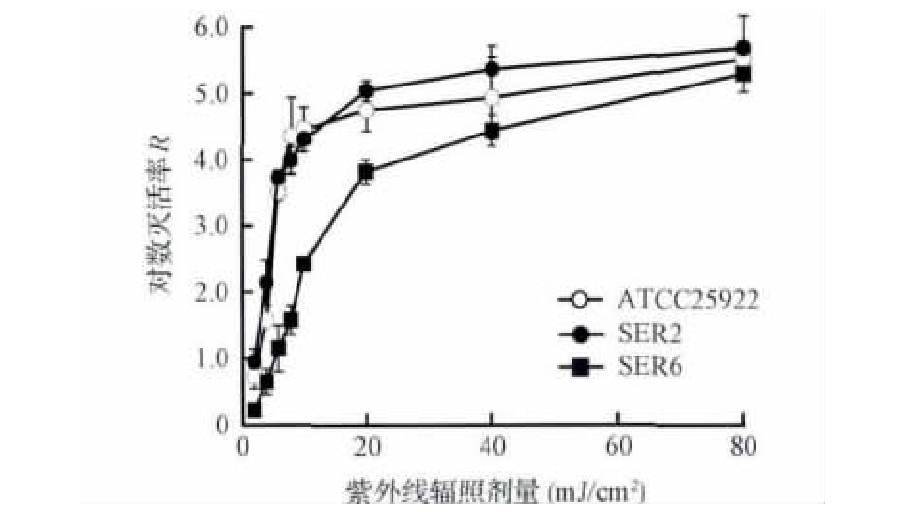 2) Effect of UV disinfection on drug resistance of experimental strains

The diameter of the inhibition ring produced by the drug sensitivity assay of the strain indicates its sensitivity to the antibiotic. Several experiments were conducted using E. coli SER6, and the distribution of inhibition ring diameters produced by the nine antibiotics is shown in Table 2. Before UV disinfection experiments, SER6 was resistant to TET, SMZ, AMP, GEN, STP and CTX, sensitive to CHL and NOR, and sensitive or intermediate to CIP; after UV disinfection experiments, its susceptibility to these antibiotics remained largely unchanged.

If we analyze the diameter values of the inhibition rings, we find that the diameter of the inhibition rings of TET, SMZ, AMP, and STP is very stable before and after the UV disinfection experiments, and even the coefficient of variation of many experiments is 0; while the diameter of the inhibition rings produced by GEN, CHL and NOR actually changed. The ring diameter of GEN became smaller after UV disinfection and was significantly different from that before the disinfection experiment (p < 0. 05); the ring diameter of CHL also became smaller (p < 0. 05); while the ring diameter of NOR became larger (p < 0. 05). This result suggests that the stability of resistance to different antibiotics differs somewhat, even for multi-drug resistant strains. UV irradiation, as an environmental factor, has a mutagenic effect on strains. Those bacteria that are not stably resistant may be altered by this mutagenic effect, which may be manifested by some individual bacteria, as visualized in the results of the drug sensitivity assay, where the distribution of inhibition ring diameters became discrete and even showed significant changes in the mean diameter values.

Table 2 Diameter of inhibition zone related to E. coli SER6 before and after ultraviolet irradiation

3) Effect of UV disinfection on the cytoarchitecture of the bacterium 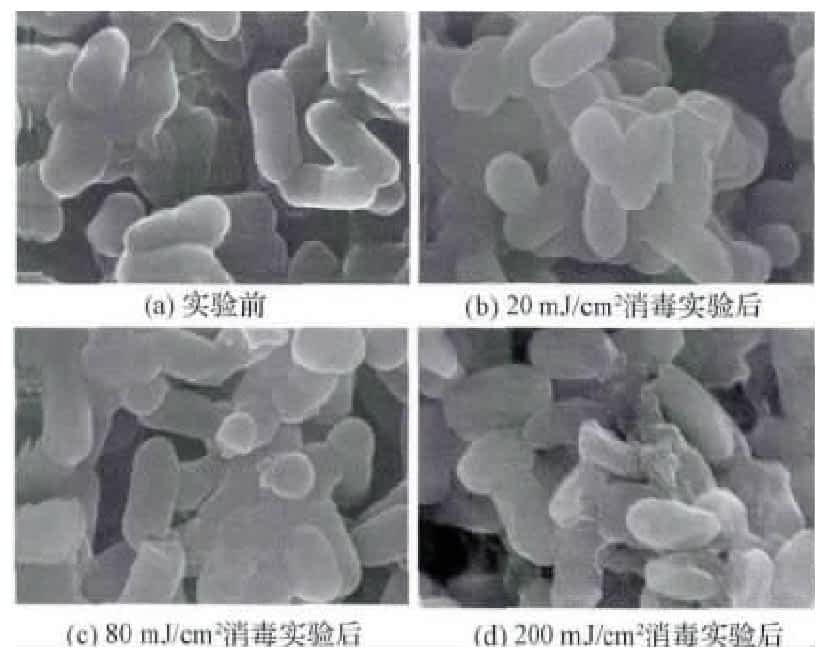 The cell wall of bacteria not only maintains the intrinsic morphology of bacteria but also plays an important role in the exchange of substances between the cell and the external environment. The complex structure of the outer membrane layer of the cell wall of Gram-negative bacteria, which can effectively block the entry of antibiotics and other substances into the bacterium, is one of the natural drug resistance mechanisms of certain bacteria. Damage to the surface of bacteria implies a weakening or loss of resistance to external adverse factors, and their drug resistance characteristics and survival ability are inevitably altered. Most of the previous studies have concluded that the inactivation of bacteria by UV light is mainly due to the inactivation of bacteria.
The results of this experiment directly demonstrate that UV disinfection causes damage to the surface and integrity of the bacteria from a microscopic point of view. In addition to the high dose of UV irradiation, this phenomenon is also closely related to the wavelength of UV light: it has been reported that after 1 h of irradiation with a 500 W UV lamp (primary wavelength 365 nm), the surface of the bacterium was damaged, but the structural integrity was not changed. The UV source used in this study was a 20 W low-pressure UV lamp with a main wavelength of 253.7 nm, which is more powerful in killing microorganisms and more likely to cause serious damage to the morphology of the bacterium.

(1) The log inactivation rates of the three experimental strains of E. coli ATCC25922, SER2, and SER6 increased with increasing UV irradiation dose, especially in the range of 0 to 20 mJ/cm². 200 mJ/cm² high dose UV irradiation caused damage to the bacterial cell wall and even destroyed the integrity of the bacterial body.

(2) The UV disinfection inactivation curves of E. coli ATCC25922 and SER2 were similar, while E. coli SER6 was more resistant to UV disinfection, and its logarithmic inactivation rate was significantly lower in the range of 0-20 mJ/cm² irradiation dose.