UVC Lamps And Their Application In Disinfection

UVC Lamps And Their Application In Disinfection

This paper introduces various low-pressure gas discharge UVC lamps that produce germicidal UVC (253.7nm) and the basic physical characteristics of the UVC radiation and analyzes the germicidal effect of these lamps, the range of use, the various factors that affect their germicidal effect, and the precautions to be taken when using them.

4 Application of UVC lamps in disinfection

Low-pressure mercury vapor discharge UV disinfection lamps are made of quartz glass tubes or short-wave UV tubes, filled with low-pressure inert gas and a small number of mercury elements, metal cold electrodes, or hot filament electrodes at both ends, by adding high voltage to both poles or after triggering the high voltage to start the lower power supply voltage to maintain the discharge, thereby producing UV light mainly at 253.7 nm. The germicidal effect of this UVC is very strong and can destroy bacteria or viruses that are harmful to humans, thus providing disinfection. The main varieties of low-pressure mercury vapor discharge UVC disinfection lamps are as follows:

The electrode of this discharge lamp is wound with a tungsten filament into a double spiral filament, coated with a mixture of barium carbonate, strontium carbonate, calcium carbonate, when heated by electricity, the mixture is activated to decompose to form calcium, strontium, barium oxide. When the lamp is started, the filament is heated to emit electrons, which bombard the mercury vapor inside the lamp, causing the mercury atoms to be discharged.

The electrode of this discharge lamp is a double spiral filament wound with tungsten and coated with a mixture of barium carbonate, strontium carbonate, and calcium carbonate, which is activated and decomposed to form oxides of calcium, strontium, and barium when heated by electricity. When the lamp is started, the filament is heated to emit electrons that bombard the mercury vapor inside the lamp, causing the outer electrons of the mercury atoms to leap to high-energy orbital positions and become excited states. The electrons that jump to the high-energy orbitals only stay for 10-5 to 10-11 s and then fall back to the low-energy orbitals, releasing energy in the form of ultraviolet light. More than 95% of the ultraviolet rays emitted by this lamp have a wavelength of 253.7 nm, and there are also small amounts of wavelengths of 184.9 nm, 404 nm, 435 nm, 545 nm, 577 nm, and 579 nm.

The low-pressure mercury lamp discharge pressure of mercury vapor is about 0.006Torr, the general use of ultraviolet transmission rate of more than 80% of the quartz glass for the lamp. The radiation intensity of this lamp is maximum at a temperature of 40 ℃. Low-pressure mercury lamps include the following four types.

The method is to add 0.01%~0.05% titanium oxide and 0.07% alumina to the quartz glass, so that the UVC wavelength less than 200nm is absorbed and the O₃ produced is very small.

The lamp is made of nickel electrodes, filled with mercury and argon in the quartz tube, by the strong electric field, so that the cold cathode emits electrons, bombarding the mercury atom so that it excites the light. The lamp can be made into a variety of shapes, such as disc-shaped, U-shaped, straight tube, etc., radiation of ultraviolet radiation more than 60% of the wavelength of 253.7nm.

The pressure of the mercury vapor in the lamp can reach several atmospheres, the power can reach 500 ~ 1 000W or higher, only a small part of the radiation spectrum is germicidal UVC, but the total energy is large, so it is still a good source of disinfection UVC, generally used for water disinfection.

The physical properties of the 253.7 nm UVC produced by these mercury lamps are described below:

Linearly propagating UVC propagates in space as a transverse wave, and its propagation speed c is the speed of light, which is equal to the product of the frequency f and wavelength λ per second of vibration and can be expressed by the following equation:

The released ultraviolet energy is in the form of light quanta and can be calculated by the following equation:

The 253.7nm UV light penetrates 2cm of water and is blocked by suspended particles in the air. When the 253.7nm UV radiation hits the surface of the material, it is generally absorbed and converted into the internal energy of the material but does not easily penetrate into the deep part of the item, so the UV radiation can only kill the microorganisms on the surface of the item.

UV radiation at the interface of the two media will be reflected and refracted when entering the second media. The reflection coefficient of various materials to 253.7nm UV is different, magnesium oxide is 80 % to 93 %; polished aluminum is 60 % to 90 %; white paint is 46 %; white lime is 40 %, white tile is 4.7 %. The reflective material of UV lamps can be selected accordingly.

The same effect can be obtained with high intensity for a short period of time or low intensity for a long period of time with the intensity of the UV source above 40 μW cm². The lethal dose (μW-s cm²) of ultraviolet radiation to microorganisms on the surface of the object is: Staphylococcus aureus, 2 180 to 4 950; Staphylococcus Albus, 3 300 to 4 200; Escherichia coli, 2 100 to 6 400; Pseudomonas aeruginosa, 6 500; Serratia marcescens, 5 500. The dose of microorganisms killed by UV light can be estimated by a mathematical model (Y = kill rate, X = dose in the following equation):

The doses required to kill 99.9% of microorganisms in the water are Bacillus subtilis, 40,000; Escherichia coli and Staphylococcus aureus, 12,000; Mycobacterium tuberculosis, 20,000; and influenza virus, >5,000. In general, Gram-negative bacteria are the most sensitive to UV light, followed by Gram-positive cocci; bacterial bacilli and fungal spores are the most resistant; viruses are also killed by UV light, and their resistance is between that of bacterial propagules and bacilli. 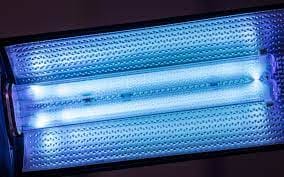 1) The influence of voltage

2) The influence of distance

According to this formula can be deduced from the UV lamp radiation intensity at different distances.

5) The effect of irradiation time

UV disinfection effect is exponentially related to the irradiation dose, which can be expressed as

6) The effect of organic protection

7) The influence of microbial species and the number

4 Application of UVC lamps in disinfection

1) Scope of use of UVC lamp

UV disinfection lamp can kill measles virus, tuberculosis bacillus, influenza virus, adenovirus, poliovirus, coxsackievirus, staphylococcus, meningococcus, pneumococcus, and other microorganisms in the air. UV light is a simple, convenient, inexpensive, and reliable way to disinfect the air. UV light can also be used to disinfect surfaces. At the same time, it has a good sterilization effect on microorganisms in water, no residual toxicity, and no harmful products are formed after disinfection, so it can be used for drinking water disinfection. UV light also has a good killing effect on microorganisms in sewage and can be used for sewage disinfection. Since the UV disinfection lamp has the function of air disinfection, surface disinfection, and water disinfection, it can be widely used in public places and public supplies in hospitals, cultural and entertainment venues, bath service units, hotels, restaurants, bars, teahouses, public and cab cabins, light rail and subway cars, aircraft and ship cabins, stores, and shopping places, community places, schools, libraries and bookstores, public secondary water supply tanks and storage containers, swimming pools, banks and currency, child care institutions, sports venues and public fitness equipment, beauty salons, air conditioning systems, etc., to prevent the spread of germs in public places or through public supplies. 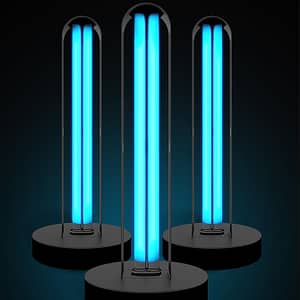 ① Disinfection of the surface of goods

③ Disinfection of water and other liquids

First of all, in the process of use, the surface of the UV lamp should be kept clean, generally, every two weeks with alcohol cotton ball wipe, found on the surface of the lamp dust, oil, should be wiped at any time. Secondly, when disinfecting indoor air with UV lamps, the room should be kept clean and dry to reduce dust and water mist, and the irradiation time should be extended when the temperature is lower than 20 ℃ or higher than 40 ℃ and the relative humidity is greater than 60%. When disinfecting the surface of the object with UV light, the irradiated surface should be directly irradiated by UV light, and the irradiation dose should be sufficient. Finally, however, great care must be taken not to expose the lamp to UV radiation directly to the human eye or bare skin to avoid burns.