UVC Sterilization- Something You May Must Know

UVC Sterilization- Something You May Must Know

Recently, we have seen many friends are concerned about the news related to UVC sterilization while generating a lot of questions, in response to your current concerns, combined with the current development of UVC sterilization, to give you a simple explanation.

UVC in the end can kill bacteria? This issue is a common concern for everyone. This is confirmed by the relevant authorities at home and abroad, this is possible, UVC deep ultraviolet radiation can release high energy, by destroying the DNA structure of bacteria, the bacteria are directly killed. 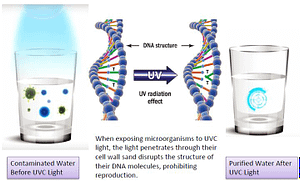 UVC sterilization has been proven feasible, so is it all bacteria can be killed? This is to mention a term, radiation flux, it refers to the unit of time area, the UVC lamp beads released energy, the unit is mW.

UVC sterilization is dependent on the UVC lamp beads to achieve. So how to judge the UVC equipment by distinguishing between UVC lamp beads, mainly by the following points.

All inorganic packaging as the name implies, is the entire packaging process of the lamp beads are used small molecule materials, such as metal and quartz glass, etc., the chip of the lamp beads is fixed through the eutectic process connected, bracket base is integrated or through metal welding, the surface of the quartz glass is metal sealed and become, you can see the glass window from the surface of the lamp beads below the metal traces. Full inorganic encapsulation has high technical requirements, good sealing, stable product quality, and the service life is generally more than several times that of semi-inorganic encapsulation.

Organic packaging refers to the process of packaging, through the silver glue or other glue to achieve a fixed connection between the chip and the base of the bracket, the glass window is also bonded through the glue, then from the glass window of the lamp bead can be seen from the glue sealing traces. The organic encapsulation process using glue and other organic macromolecule structure material, UVC lamp beads in the process of work release of energy, will produce damage to its structure, resulting in the sealing of the lamp beads and luminous efficiency is reduced, thus reducing the service life of UVC lamp beads. All relatively speaking, UVC lamp beads with a full unclassified package will be more reliable than the semi-unclassified packages.